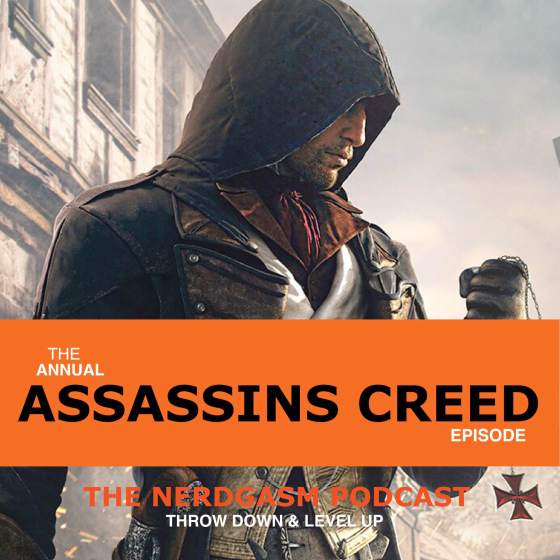 Monsieur Craig pops over to the studio this week to join Adam and Dan for the Annual Assassins Creed Episode. While it is no secret that Assassins Creed: Unity was plagued with bugs for the first few months of release, the game actually shaped up to be a fresh new turn for the series. After a combined 250 hours with the game, we open up about the good, the bad and the ugly. So, without further adieu, grab yourself some wine and some cheese and enjoy an in-depth look at the game.

Feeling nostalgic? Dig way back to Episode 12 for our take on Assassins Creed IV: Black Flag, peppered with Dan and Adam singing sea shanties over a bit of rum.

With Dan out of town, Craig joins Mike and Adam to round out this weeks episode of The Nerdgasm Podcast! Listen to an episode diving into the expectations and value of video games today including this weeks best geek news! … END_OF_DOCUMENT_TOKEN_TO_BE_REPLACED

I recently became privy to a gaming acronym: SSDG (Same Shit Different Generation). Inside a trend of consistent sequential releases (most times annually), this is a rampant issue in the gaming industry. With an annual release, Ubisoft is on the cusp of SSDG constantly – but does this apply to AC: Unity? A gorgeous open world with a brilliant outfit doesn’t always make a great game — especially one that requires over 50 hrs. of game play with that annual release. Will the incremental changes and differentiating mechanics be enough to hold my interest through another historical backdrop? These questions flood my mind as my fingers haphazardly fumble though another campaign in the Assassins Creed. Here are my first impressions.

10 hours into the game and I am already dreading the rooftop collectables, high synchronization points and the thousand chest march that Assassins Creed has now become known for. An enormous crowded city with new parkour, fighting and stealth mechanics helps me sing praise to the game despite its similarities to the collectable barrage in the previous titles. So far I am enjoying the new mission types, co-op capabilities as well as the expansive character customization (complete with useful statistics that impact your game). Ubisoft (even this early in the game) has done a great job in utilizing not only the companion app (albeit buggy sometimes), but the reward benefit for playing both the app and the game together.

As first impressions go, the plot in AC: Unity offers a mundane experience, but the where Arno fails to entice me in a compelling character plot, Unity surpasses it’s successors in three main areas: customization, companion and co-op. I’m anxious to play through the game some more and level up (only by throwing down mind you) Arno himself through the different ranks of the Creed.

For more on Assassins Creed: Unity listen to episode 61 and the upcoming episodes from The Nerdgasm Podcast!

Our heroes talk about all their favorite GamesCom reveals through gameplay or the gaming news in general. They cover both Xbox One and PS4 titles that might be added to the lists of ‘Games To Buy’ as well as talk … END_OF_DOCUMENT_TOKEN_TO_BE_REPLACED

Nerdgasm’s abound this week on all things #E32014. Join our heroes as they discuss every game announcement from last week’s major press conferences and what the news means to them.

Looking for something specific? Use the time stamps below to jump right to the content you care about most.